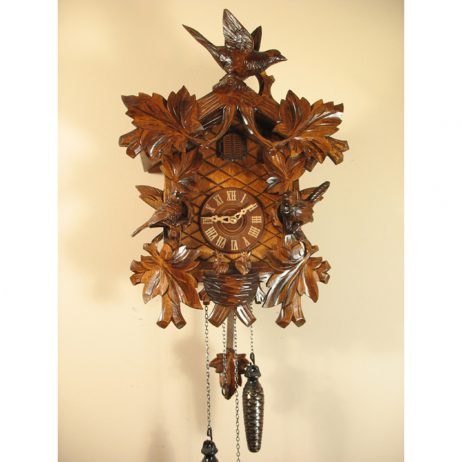 Beautify the dcor of your house with this exquisite Musical Quartz Cuckoo Clock with Hand Carved Birds by Romba.
This beautiful walnut finish Germany made clock features hand carved birds, grape leaves, maple leaves, vines and nest that amplify the its elegance. The incredibly lifelike little birds are hand-carved in three dimensions. This clock is musical and plays one of its 12 tunes along with the call of a cuckoo when the clock strikes the hour or half-hour. Featuring wooden clock and numbers and carrying a 1 year warranty, this clock also has a photo sensor which turns off the sound when it is dark.

This large and beautifully-carved cuckoo clock speaks of old-world charm and craftsmanship. It features a beautiful and detailed carving of three birds which are hand-carved in three dimensions. The little birds are incredibly lifelike and stand guard over their young nested in the thicket of grape leaves. When the clock strikes the hour or half-hour the door opens, a cuckoo appears and calls along with the sound of a rushing waterfall. This clock also plays music. One of 12 tunes will play after the cuckoo calls. It even features a photo sensor, where it will turn off the sound when it is dark.