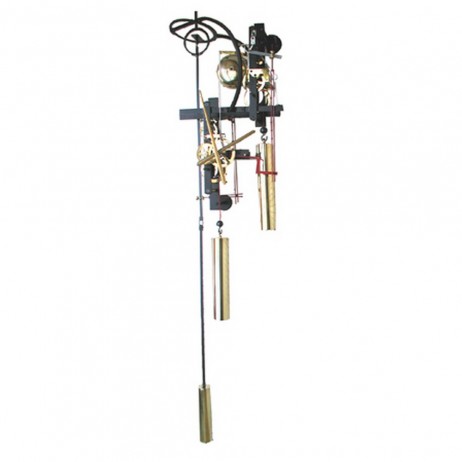 A large and impressive piece, this clock is more a timekeeping sculpture than a mere clock.

Each Jean Kaze wall clock is uniquely designed. This particular example is made entirely by hand and is an artistic reinterpretation of an original. A large and impressive piece, this clock is more a timekeeping sculpture than a mere clock.

The movement is cast-iron, steel, and raw brass and is completely visible. The large and complicated clock is essentially two movements (one for the time and one for the strike) joined by a spidery maze of levers and beams. The clock strikes the hour and half-hour on a large, cast-brass bell and a long, overarching pendulum swings and sets the whole piece to motion.

Mobier clocks are popular and widespread in France and Switzerland, originating mostly from the French Jura region. They emerged at the end of the Seventeenth Century and were produced in large numbers up to the beginning of the Twentieth Century.

This is a one-of-a-kind piece by the Swiss designer-clockmaker Jean Kazes who is famous for his sculptural timepieces. He has monumental clocks in Switzerland, including one that stands inside Hotel Cornavin and the Patek Philipe factory in Geneva.

North Coast Imports, in Berea, Ohio, is currently displaying one of the very few Jean Kazes-designed works in the United States.