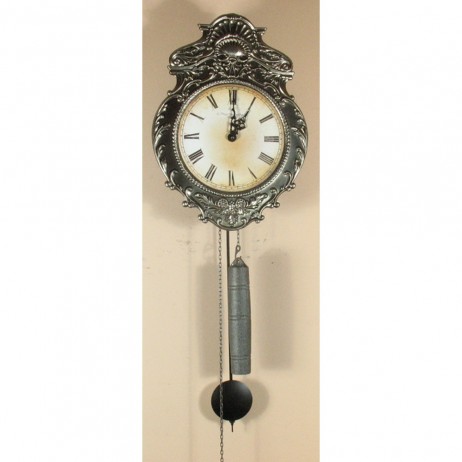 Hermle Aachen 17th Century Reproduction Morbier Clock with Pewter is all about opulence. Coming from the house of Hermle, this German clock features a unique and stylish antique, pewter finish. A lot of your guests may relate the clock to Game of Thrones – thanks to this rustic, royal look.

This wall clock has a brilliant floral design that encases the fading dial. The dial has been given that look on purpose. The solid-brass mechanism of this clock says all about its precision and durability. You can use it in your hallways or just gift it to someone who’s as precious to you as time.

Aachen Reproduction of a 17th Century Clock with Pewter finish

In 1640 the Waaguhr was the first mechanical clock that was affordable by the new middle class in Europe. Its simple design allowed for only one hand indicating the hours. The average person of the Seventeenth Century measured time with only three times of day:sunrise, high noon, and sunset.

This mechanism is a more modern and accurate version of the style of clock which was available in 1640. It includes a pendulum escapement (developed in 1659 by Christiaan Huygens) and a solid brass mechanism. There are two hands (one for hours and one for minutes) and it runs eight days on a single winding. This piece also includes a minute hand, which was developed in a clock in 1577 by Jost Burgi (who is also a contender for the invention of logarithms) made for astronomer Tycho Brahe.

This clock is also made in the style of a Morbier or Comptoise clocks. Morbier clocks are popular and widespread in France and Switzerland, originating mostly from the French regions. They emerged at the end of the 17th Century and were produced in large numbers up to the beginning of the 20th Century. They can be easily recognized by their hammered-brass dial.

The Aachen is from Hermle and is made in Germany.

If you do not see a specific model, manufacturer or style, call us toll free at (866) 467-6460.
Copyright © 2018 Decorative Clocks, Accessories for Home, Curios, Home Bars - Expressions of Time - All Rights Reserved.