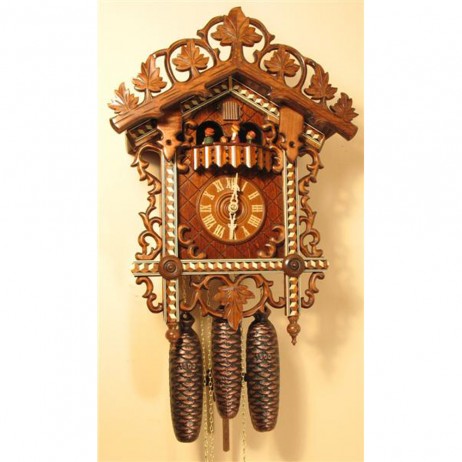 Enhance the beauty of your house with this elegant Bahnhausle Musical Cuckoo Clock with 8 Day Movement by Romba.
This beautiful clock features hand-carved grape leaves, maple leaves, vines, wooden hands, numbers and bird. It can go on for 8 days on one wind. A cuckoo appears and calls along with the clocks gong strike when the clock strikes the hour or half-hour the door opens. This German made clock also has a large, Swiss-made, 36-note music mechanism that plays music after the cuckoo finishes. The four color inlay and the animated dancers enhance the beauty of this clock which carries a 2 year warranty.

The Bahnhausle design has been an incredibly popular design since 1850. Friedrich Eisenlohr of Furtwangen, Germany first submitted the design as part of a contest for the Grand Duchy of Baden. His inspiration was a railroad guards house overrun by vines and leaves. When the clock strikes the hour or half-hour the door opens, a cuckoo appears and calls along with the clocks gong strike. After the cuckoo calls, music plays from the symphonic music-box mechanism made in Switzerland. This clock is hand made in the Black Forest in Germany. The mechanical brass movements are driven by three weights and time escapes with the tick of a traditional pendulum. The cuckoo call sound is made by two wooden whistles with bellows inside the clock case.