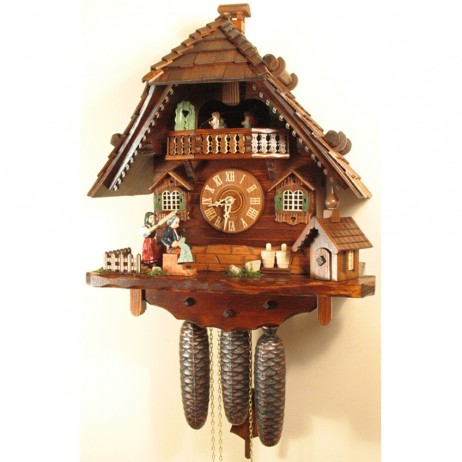 The Angry Hausfrau Cuckoo Clock with 8 Day Movement is a telltale that depicts the every household’s funny story. For the men, this clock may act as a memory of the times when they’ve seen their wives flaring up with anger.
Crafted with high-quality wood, this chalet clock features an angry woman figure hitting her husband with a rolling pin. Not just that, he gets hit once at the strike for every hour. Doesn’t that make you laugh already?
This is a brilliant animated clock which runs for 8 days on one wind. The large, Swiss music box of this clock gives out the most pleasing tunes. Also, the animated dancers, hands of the clock, the birds and numbers on the dial are crafted from wood. They reflect Germany best watch-making art. Get this stunning teller of time for you home today!

Whimsical and sometimes realistic animations such as this one were commonly reproduced mechanically in the Black Forest since the early Nineteenth Century. Here, a woman beats her stitching husband over the head with a rolling pin. One strike for each hour. The tailor moves his sewing arm.

The scene recalls the Grimm Brothers story about the tailor who, with one blow, killed seven flies that were gathering around his fresh jam. He was so proud he made a belt and stitched on the lettering Seven With One Blow. As he strutted about town with this belt, rumor began to circulate that he had killed seven MEN with one blow.

When the King heard of this he called upon the tailor to solve some problems for him (giants, a dragon, etc.) and in return the taylors reward (of course) was to be the Princesss hand in marriage.

The tailor had several adventures after that, and even managed to outwit every creature that came across his path using brain instead of brawn to achieve his goal. When he returned to the King he settled down with his new wife, the Princess, and started up his tailor business again.

Imagine the Princesss displeasure when she found that she hadnt married a dashing and courageous prince at all. She was stuck with this lowly Tailor!

This eight-day, musical cuckoo clock features a large 36-note music box with an excellent sound. It has a night shut-off lever so you can turn off the music and cuckoo and leave the time-keeping function running.

The dial, hands, and numbers and bird are all of solid wood. The shingles on the roof are individually laid, and all the carvings are done by hand. Among other details, this clock includes logs that were commonly placed on Black Forest roofs to hold the huge amounts of piling snow.

This Angry Hausfrau cuckoo clock is by Rombach und Haas and is exclusively available through North Coast Imports. It is an Original Black Forest Clock, certified by the VDS.

The clock comes packaged in genuine recycled materials, each clock made and packaged BY HAND by Black Forest craftsmen the same way they have been for hundreds of years. The bird and dancers move along with the mechanically produced music and cuckoo call.

The sound of the bird is produced by real wooden whistles and the music box movement is hand made in Switzerland .